(Yet another) Goa trip!

“So are you all childhood friends?”

“No, we are office colleagues. Why?”

“Oh okay. You just come across as a group of friends who grew up together.”

When the PushCrew Sales team decided on Goa as the venue for their second annual team trip, after having been to the same place just four months back for the first trip, the excitement in the air was lukewarm at best. Only one of us was enthusiastic with the idea of going to Goa again; one was vehemently against the plan but eventually had to give in, and the rest three didn’t care.

Before I get into the story of the trip, let me introduce the characters:

Sanjay goes to Goa six times in a year and calls himself a traveller. He takes pride in relating himself to a Monkey, and often when you look at him while he is occupied, you will notice that the resemblance is indeed uncanny. Sanjay’s favorite line to his team is ‘I don’t know how you do it, but you have to get me the numbers’ (he often is actually unaware of how we do it), and Sanjay’s superpower is being able to have instant multiple orgasms every time someone says the word ‘Goa’.

Shubham is the quintessential splurger of the team whose opulent requirements often bring up the budget of our otherwise frugal outings. (The guy really insisted on booking an Audi Q3 for the Goa trip). Shubham is known for trying different hairstyles to cover his bald patch. His superpower is standing at the shore in ankle deep waters and claiming to have taken a bath in the beach.

Nitpal is the team’s party pooper, in the sense that when the party is happening, he is busy pooping. He takes 30 minutes to wake up in the morning, 2 hours to get ready, and the next 2 hours to come out of his ‘just-woken-up’ zone. By the time Nitpal is fresh and ready to take on the day, everyone else is ordering dinner. Nitpal’s superpower is to be able to fake everything from an ant-bite to a cardiac arrest, just to get out of sitting in the last seat of a Toyota Innova.

Abhijit is the newest member of the team, and in this trip we witnessed him loosening up and easing in with PushCrew Sales team’s culture (which is mainly insults, abuses, and abusive insults). We all learnt in this outing that Abhijit is a living walking talking question mark. His epitaph would probably read ‘When? Where? Why? What? How?’

Here is an excerpt from an actual conversation between Abhijit and a waiter at The Leela’s, Goa:

Abhijit?—?Bhaiyya is this Leela better or the The Leela Kovalam in Kerala?

Waiter?—?Sorry Sir I haven’t been to the Kovalam one.

Abhijit?—?Yeah but do you think this is better?

Kalpak is a genius. He is the most sorted, understanding, accommodating and mature guy in the team. He is never wrong, and is really well respected by his colleagues. And to top this, he is really handsome, smart and just generally amazing. He has also written this article.

The first day of the trip was Thursday night, when we all assembled at Sanjay’s place. This assembly place could alternatively have been any other spot more convenient to everyone, but usually during such situations Sanjay utters four golden words that make us do his bidding?—?“Half-yearly review this month”.

For those of you who aren’t aware, the PushCrew sales team is very enthusiastic about their alcohol. So, at the first leg of our Goa trip (the main objective of which was to get drunk) we bought a six-pack. Our dutiful manager had also arranged three “Sandwiches” (HIMYM reference?—?*wink* *wink*), which we planned to consume during our 3 days in Goa, but we ended up eating those sandwiches in the drive to Goa itself.

A special cameo in this trip was our driver, Bhagwan. His name Bhagwan was quite apt, because for most of the trip he was pretty much non-existent to help us out, except for when we gave him offerings. Also, we had to bathe him daily, a task that Nitpal performed devoutly. No don’t get me wrong, Nitpal didn’t give the driver a bath. The driver used our room’s bathroom to freshen up every day, while Nitpal “kept watch”.

It was bizarre for all of us when Bhagwan first asked us if he could use our room’s bathroom to have a bath. I don’t want to sound elitist, but that is generally pushing your driver privilege.

But then, we are a team of sales guys at the end of the day, and as a part of our job we know how to get our point across and convince the other person that we are right, without letting the other person know he was convinced. So we put our foot down, and decided that one bathroom in the villa will be specially reserved for Bhagwan.

During our onward journey to Goa, Abhijit caught Bhagwan acting drowsy, and offered to take the wheel for a bit. Bhagwan jumped on that opportunity quicker than a BJP supporter taking religious offense on anything remotely Hindu. He moved to the shotgun seat, put his hands behind his head, leaned back his chair, and turned into the sleeping beauty. While Bhagwan slept like a little child, Abhijit drove like one.

*THE VILLA AND THE KLEPTOMANIAC

In this trip, we made a saner decision to stick to South Goa. If I have to compare, North Goa is like a Punjabi Aunty at a wedding?—?loud, crass, and in shiny clothes; whereas South Goa is like vodka?—?soothing, clear, and Russians flock towards it.

We booked an AirBnB villa (#frugality) in South Goa, right next to Cavelossim beach. The house was a serene yet humongous abode of comfort. One corner of that villa had a small library filled with some thirty odd books. Now usually I am a decent guy (as mentioned in detail in my introduction), but free books with no supervision bring out the Crime Master Gogo in me. The moment I saw those books, I announced “Wow, free books. Imma steal a couple!”. At this, my teammates transformed into this gigantic righteous monster and told me “Dare you, mot*****!”

There was an instant kick from my conscience, and I felt bad about my decision. So then I decided to steal the books and not tell these idiots about it.

I still do not know whether I stole the books or not.

For one of our dinners, we went to Fisherman’s Wharf. I would strongly recommend this place for its food, ambience, and general pretentiousness.

This dinner was our dear friend Nitpal’s advance birthday treat. And when we asked the musicians to announce it (for the free cake) they could not stop wishing ‘Happy Birthday to Nipple’.

We had two options. We could have gone and corrected them. Or we could have let this name stick around for eternity. We chose the option all dutiful friends would.

The best part of this entire trip was that evening on Agonda Beach. It had the perfect ingredients for a memorable evening?—?bathing in the lovely seawater while enjoying the sunset view, delicious food and crazy liquor shots

That evening, we encircled the bar. Shubham kept ordering the shots one after the other, and we kept drinking them. Our camaraderie made the bartender assume we were school friends, at which we could see Sanjay beaming, because he took it as a compliment for his team building skills. Later when Sanjay went to pee, we bitched the shit out of him (because we could).

But these were just the highlights of the trip. What makes a trip fun are the small moments and conversations scattered all over like chocolate sprinkles.

Whole team played cricket at a nearby park 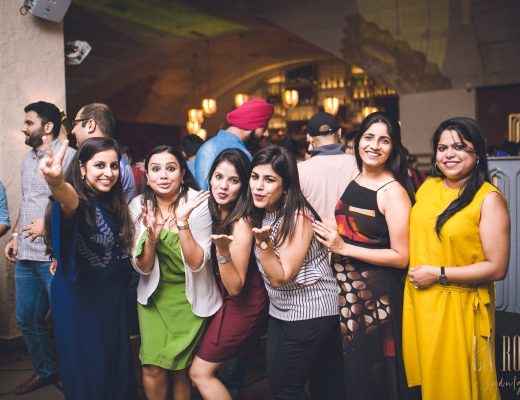 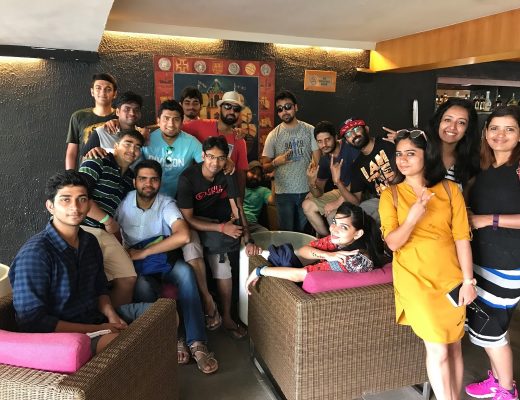 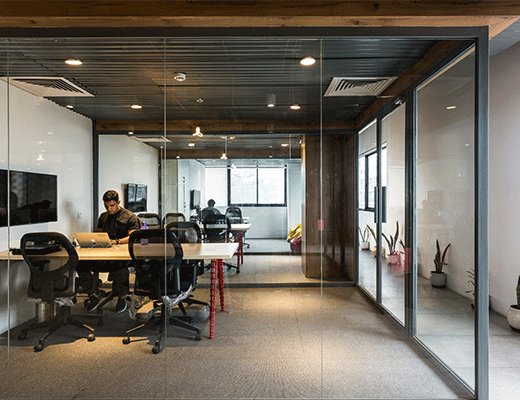